The power of individuals and the private sector

YanaiAnother thing that should be emphasized is the power of individuals and the private sector. They played a vital role. The acceleration of the vaccination in Japan was due in large part to the private sector.
YamanakaI agree. It was so fast that the vaccines were in short supply at one point. Anyone could es-;timate that 1 million shots per day were necessary for people in Japan before the fall and winter when the infection situation would worsen. I made an announcement declaring this number as a goal. The government also set a goal of 1 million shots per day, set up large-scale vaccination sites and allowed vaccinations in the workplace. The government supplied the vaccine, but the system and the logistics were entrusted to local governments and private sectors. We changed the system as we went along. These efforts from both parties paid off. If the government had made all the decisions without room for adjustments, we would never have achieved 1 million shots per day.
YanaiWhen we need to achieve something in a short period of time, decisions based on “uniformity” or “precedent” will be nothing but an obstacle. Groups or societies that put brakes on ideas and suggestions by individuals may make fewer mistakes, but they will not produce new results. This means there will be no future for them. It is a matter of the future of the country whether individuals and the private sector are in an environment where they can think freely.
YamanakaScience has also shown unprecedented development. It was inconceivable for vaccines to be ready and available within a year. They were available in such a short period of time because of efforts by startups in Europe and the United States. They already had good skills to handle the mRNA they were experimenting with clinically for almost 10 years. Their experiments failed over and over again, but they did not give up. I think there is little chance in Japan that investments will not be cut off by investors when startups fail repeatedly.
YanaiInvestors need to take measure of the nature of startups; are they just trying to make money, or do they aspire to contribute to the world from a long-term perspective, such as overcoming disease or developing technologies that reduce CO2? Also, it is important for startups to have clear purposes and plans and to communicate their visions and aspirations in a way that is easy for investors to understand.
YamanakaYou are right. It is natural for investors to expect financial returns from their investments. At the same time, the attitude toward investments has been changing in recent years. More and more investors are not looking for short-term results but expect to make a big return on their investment for the future of society, including the generations of their children and grandchildren.
YanaiIt also depends on whether you have a sense of crisis about the global environment. I think there is still a mindset in Japan that the government should take care of these major problems. Nothing will change unless individuals and the private sector have a sense of crisis and think about what they can do. Also, the government is demanding short-term results from research and academia too much. Basic research may not produce results in 5 or 10 years. Trial and error are the key to great discoveries. The single-year accounting system and the budget principle are also causing problems.
YamanakaResearch funding is divided into periods of one year at the shortest and five years at the longest. Faculty members are also given terms. Many young members are only given terms of five years. It is becoming impossible for them to conduct research where they find something that other researchers do not notice and continue to observe it under a microscope for more than a decade. This is exactly what the research by Professor Yoshinori Ohsumi (Nobel Laureate in Physiology or Medicine for his research on autophagy) was like. About a quarter century ago, the salaries for university faculty were not that high, but enough for them to eat, and they could do their research without worrying about tomorrow. However, the basic research at Japanese universities a quarter century ago was ranked around the third or fourth highest in the world. Now it is falling lower and lower. Education was called a “100-year plan” in this country. We need to think about its fundamentals from now on.
YanaiThere is no retirement age in the U.S. as long as you have tenure.Professor Syukuro Manabe, Nobel Laureate in Physics, is a senior meteorologist in atmospheric and oceanic sciences at Princeton University at the age of 90. This is not because he is protected by the system, but probably because his research and achievements are evaluated as steady and reliable.
YamanakaIn the U.S., when a researcher is hired with tenure, his or her age does not matter. Or rather, we cannot ask that. However, even if you have tenure, even if you have won the Nobel Prize, your salary will be lower and lower and your laboratory will become smaller and smaller if you don’t produce remarkable results for a long time. The Gladstone Institutes, where I am conducting my research activities, is operating based on the legacy of Mr. Gladstone, a successful real estate entrepreneur. It maintains and increases his legacy by investment while also receiving research funding from the government. The Institutes also solicit donations, so they have multiple financial pillars. The largest source of income for national universities in Japan is grants from the government. Shortly after the Meiji Restoration, Yukichi Fukuzawa said that there was no academic independence without financial independence. We are now in an era where researchers need to make efforts to obtain funding in order to sustain and develop their research. 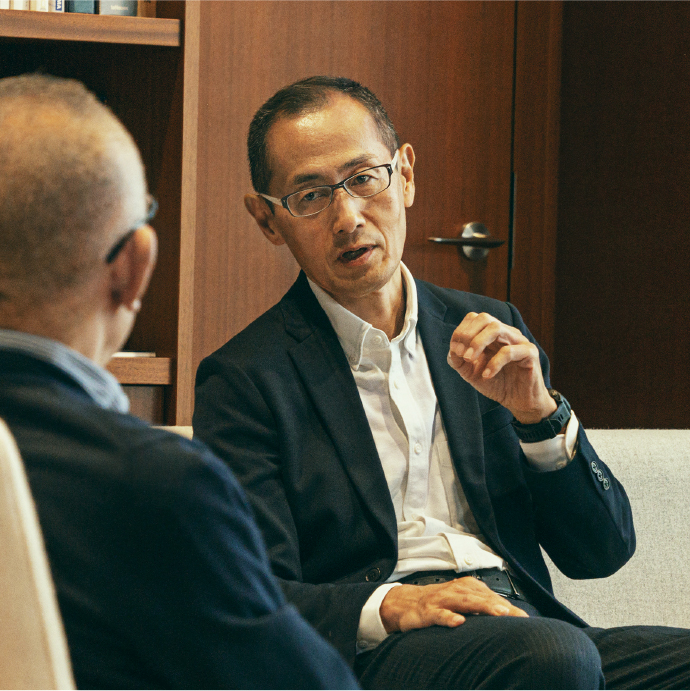 The future of research and the next generation

YanaiProfessor Manabe moved to the U.S. in the 1950s for his research in geophysics and meteorology. He could do his research using the latest IBM computers there. I heard that the performance of computers and salaries for researchers in the U.S. were more than 20 times higher than in Japan at that time. Meteorology depends on complex factors and conditions affecting each other, making it impossible for a human brain to follow on its own. Even though it was Professor Manabe’s brain that came up with the ideas, the environment which allowed him to use computers for more than half a century must have played an important role for his success.
YamanakaExactly. In the field of biology, there are more and more situations where the ability to quickly analyze and apply big data is crucial. In such cases, it is rather difficult for conventional biological researchers to introduce computers to their research. On the other hand, more people with computer skills start their research in biology and achieve results with computer analysis.
YanaiComputers are also essential for biotechnology. In order to utilize big data, researchers will need cross-border collaboration with research institutions rather than working alone.
Yamanaka It is impossible to decipher human genes without computers. For example, if you want to know why people have different heights by analyzing their genes, you will not get a conclusion by examining 1,000 of them. You may have to examine hundreds of thousands or millions of people to find out. It is impossible to find so many research subjects in Japan. My field, medical biology, is also entering an era of collaboration with researchers in mathematics, physics and computers. 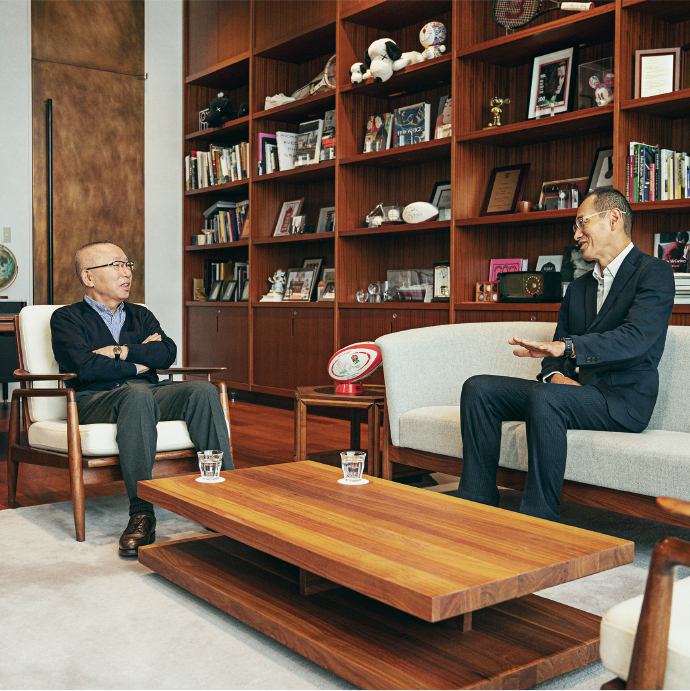 YanaiThat is why we need to think about which human abilities have an edge over computers. I believe that the liberal arts and humanities will be more important. Ultimately, it will be about how aspects like truth, goodness, beauty and basic human abilities such as integrity and love will be connected to science. Computers might take over the human world otherwise. In terms of sustainability, I believe that it is universal human integrity that can drive it as well. When we provided the official clothing of the Swedish team for the Tokyo 2020 Olympic and Paralympic Games, their committee wanted three things from the companies providing the uniforms: “quality”, “innovation” and “sustainability”. The materials and technology can be easily conveyed. In terms of sustainability, I felt that they were looking at the corporate attitude. We have been providing clothes with universal designs so that people can wear them next year and the year after that, not just for one season. It seems that they appreciated this attitude. We also do not want to make products that will soon be thrown away. That is a truth you know without asking a computer.
YamanakaTherapeutic drugs must meet the requirements of quality, but they also have to be innovative. On top of that, they must be affordable. Therapeutic drugs are not considered successful unless they are affordable to everyone. Creating a cure or medicine is not the end of the story. As you said, we always need to rely on our integrity when we ask ourselves what medical science is.
YanaiAffordability is our principle. Clothes “MADE FOR ALL” means affordable and sustainable clothes. Sustainable clothes, for us, are those that do not increase the burden on the natural environment, society and workers, and which can be worn for a long time. The “ALL” of “MADE FOR ALL” naturally includes sustainability. We believe that this is the only way for our future. There is still a lot of work to be done.
Yamanaka
There has never been a time with more opportunities for young and open-minded people than today. We cannot see the future now. This means that things will definitely change. We cannot create opportunities if we are satisfied with the current situation and do not want to change. Yanai It is no good if we just run on the existing rails. We must create our own future. A bright future will not come if we just wait for it. We will keep on doing everything we can until our customers truly feel that LifeWear equals sustainability. I have no doubt that this is our future. 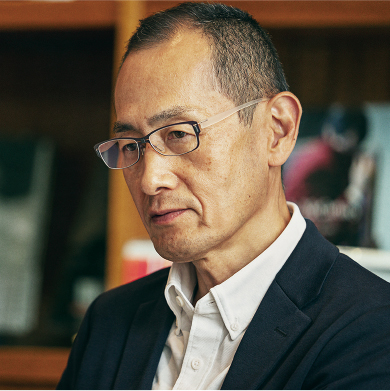 Professor Yamanaka is a leading Japanese scientist who works to promote the importance of scientific research. Awarded the Nobel Prize in Physiology or Medicine in 2012 for his success creating iPS cells from skin cells, Professor Yamanaka is a pioneer in new research fields, and has received many Japanese and international scientific awards. Currently focused on the medical application of iPS cells, he is the director of the Center for iPS Cell Research and Application (CiRA) and the representative director of the CiRA Foundation. He is also a member of the Gladstone Institute in the United States, and travels between Japan and the U.S. to undertake his research. Since March 15, 2020, Professor Yamanaka has been working to distribute evidence-based information and advice related to COVID-19. (As of January, 2022)