Worker Wellbeing as a Priority

Fast Retailing listens carefully to worker voices in the supply chain
to understand and address workplace issues.
We go beyond our own boundaries to cooperate with governments
and international organizations for better working environments.
Here are some examples of such projects. 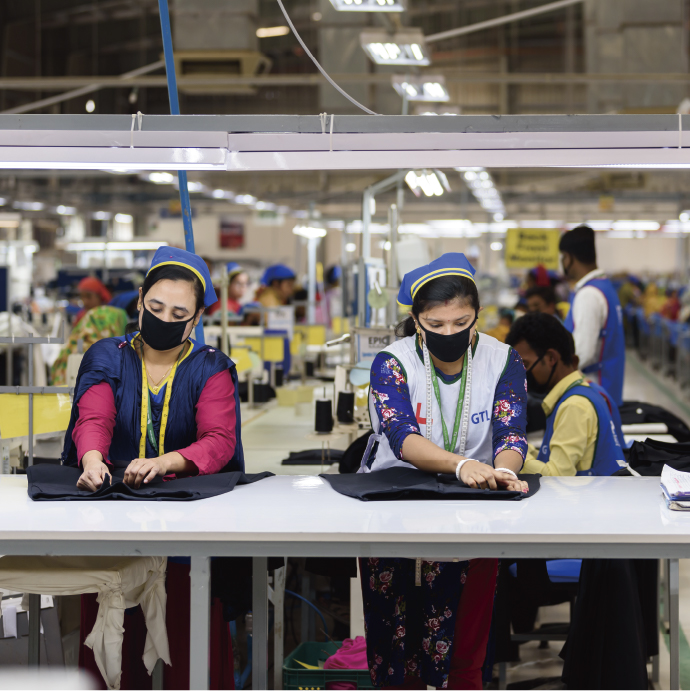 The garment industry is one of the main industries of Bangladesh, and a large part of it is supported by women.
Unleashing their potential and expanding their field of activity will lead to the development of local communities.
The “Women’s Empowerment Project”, launched by Fast Retailing in cooperation with UN Women,
provides training for female workers in sewing factories and fosters personnel who can hold managerial positions.
We interviewed two women involved in the project about the project’s significance.

“The greatest thing I have acquired in this training is confidence”, said Ms. Akter, who works at Green Textile’s sewing factory. After attending the training, she was promoted to supervisor and now oversees a line with 30 machines. At 8 am each day, she confirms the sewing line does not have any problems, reviews reports, checks the attendance of members, and sets the goals for the day.
“I feel satisfied with my work when I consider how I can cooperate with all of my team members to achieve our goals”, Ms. Akter said. Now 27 years old, Ms. Akter has been with the company for six years, starting out as a sewing machine operator. One year ago, she attended Women’s Empowerment training, introduced by Fast Retailing and UN Women, where she learned about leadership and communication. Through the training, Ms. Akter realized she had been under the misconception that “women are incapable of taking up managerial positions,” and then shifted her mindset to believe she is capable. This also affected her surroundings. “Most supervisors used to be men. At first, I was told women were incapable of being supervisors, but when I showed my achievements, male employees changed their attitudes.”
Since then, there have been some female workers who wish to be promoted to supervisors like Ms. Akter. “In Bangladesh, the idea is still prevalent that women are less capable both at work and at home. But if we are offered an appropriate and supportive environment where we can make our best efforts, women can be promoted to leadership positions and boost their careers. We ourselves have to change our own mindset that we cannot do something just because we are women,” she said.
After her promotion, Ms. Akter receives a stable income that is enough to support her parents’ household, and she is confident she can further improve her life through her own volition. “Now I can believe I am capable of doing things which I had never dreamed of achieving when I started working. My next aim is to move up in my career to become a production manager.” Embracing her newfound self-confidence, Ms. Akter continues to challenge herself and tries to achieve new things.

EPIC Group, Green Textile inclusive, is a global company with factories all over the world, which puts effort into supporting women, who make up 85% of its 30,000 employees. “In the garment industry, a patriarchal view of work has long persisted, namely, that men take roles as managers, whereas women work as factory workers. It has been one year since the company started offering its Women’s Empowerment training, originally introduced by Fast Retailing and UN Women, through which the number of female supervisors has increased from nine to 92. Since the training began, it has become easier for female workers to talk to their supervisors about issues common to women, such as family problems or physical conditions, and this has brought about greater levels of cooperation in the workplace. Male employees also welcome the training, as it has helped them recognize the potential of women and eliminate prejudices that hinder female achievement. Now that female workers have the confidence in themselves to play more active roles in the company, the overall productivity at our workplace has also improved. By providing women with confidence and technical acumen, I hope to draw on our strengths, such as empathy and the cultivation of human resources to operate the company. I will continue to support workplaces where both men and women have equal opportunities to show their maximum performance.”