Growing Up in a Refugee Camp 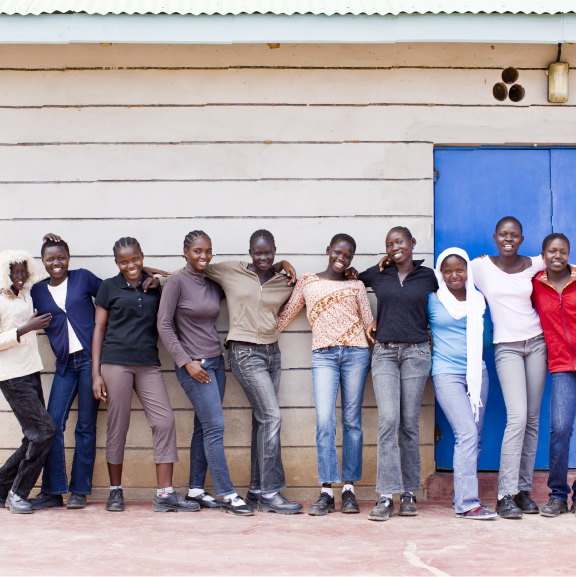 The humanitarian crisis in Somalia is becoming particularly desperate. Conflict and drought have forced roughly one third of its population to flee the country, leading to a crisis of unparalleled proportions. Many people in the region desperately need help. In 2012, under the All-Product Recycling Initiative, UNIQLO distributed 1 million articles of clothing at a refugee camp in Kenya, where many Somali refugees have settled.

On a recent visit, UNIQLO staff quickly came to grips with the severity of the situation in the Kakuma Refugee Camp in northwestern Kenya. The region is underdeveloped compared to other parts of the country, and clean water is scarce. Despite these conditions, the refugees remain unable to return to their homes. The camp offers basic food, water and shelter, in the form of tents, but there is never enough clothing to go around. Sand and dust from the drought and frequent sandstorms are a problem, while water shortages make it difﬁcult to wash clothing. Children’s apparel, in particular, is in short supply, and very few items for kids ever make it to the camp. Many children at the camp wear worn-out T-shirts made for adults or nothing at all. This leaves them vulnerable to infectious diseases and injury.

Fast Retailing distributed 1 million articles of clothing on its most recent visit to the Kakuma Refugee Camp, the most it has ever donated at one time. Each person received two tops and two bottoms, but even then, only 250,000 people were able to get clothing. There are 630,000 refugees in Kenya,
so 1 million items is simply not enough, which is why the FR Group will continue to supply clothing to these camps.

On the ﬁrst day of the FR Group’s most recent visit to Kenya, staff visited a boarding school for girls. The smiling students were all wearing UNIQLO clothing that the company had previously sent.

Hollywood star and UNHCR Goodwill Ambassador Angelina Jolie donated the funds that were used to build the school. The students in this school are lucky because the school supplies them with their own uniforms, which is not common at refugee camps. However, when the FR Group’s photographer came to take pictures, many of the girls wanted to pose for the camera in their smartly coordinated UNIQLO tops and bottoms, as well as other items. One of the girls was wearing jeans that were a bit too tight for her, but she liked them, anyway, because they “look good,” she said. When asked when she usually wears her UNIQLO garments, one girl said, “I love dressing up for holidays, so that’s when I wear them.”

Although the girls are quite fashion-conscious and clearly love clothing, each of them could probably ﬁt all of their possessions into a single, small chest. Each girl has about three or four articles of clothing and some of them wear their uniforms in the day and at night, so they were overjoyed to receive clothing from UNIQLO. The clothes have already become an important part of their lives.

When asked about their dreams for the future, the girls wrote down jobs like “journalist,” “doctor” and “teacher.” They work hard to keep up with school, despite the camp’s harsh environment. But hope- fully, the relatively small gift of clothing will be able to help them gain conﬁdence as they work toward their goals. Apparel is essential for protection against the heat and cold, and is also important for hygiene. But as the girls of the Kakuma Refugee Camp know, truly great clothing is also an important means of self-expression.

The FR Group is determined to continue to assist people who need clothing.