The Future of Refugees Affects Us All

Ten years on, I want to help refugees fleeing to Bangladesh,
as a UNIQLO employee 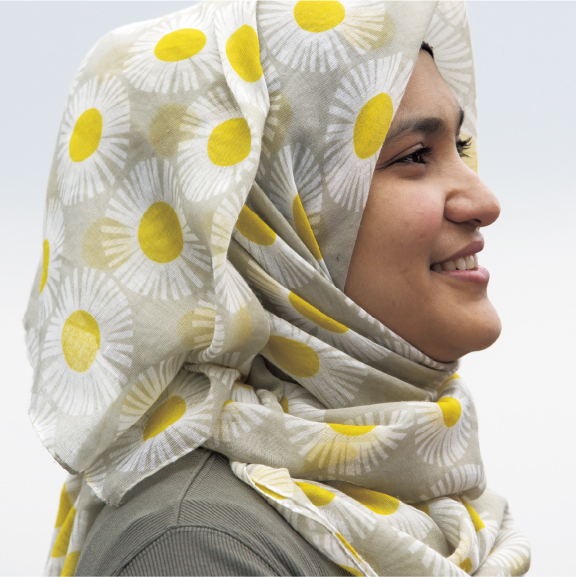 Khadiza’s father, an ethnic Rohingya from Myanmar, fled to Bangladesh after taking part in political activities. Her mother followed with their three children. Khadiza, the 6th child, was born in Bangladesh. Khadiza was betrothed to a man who had fled to Japan for the same reasons and earned refugee status. She arrived in Japan on a cold New Year’s Eve in 2006 with a dream.

I am the sixth of 10 children. My three eldest siblings were born in my parents’ homeland of Myanmar. My other siblings and I were born in Bangladesh after my parents fled there. My mother and father are Rohingya, an Islamic ethnic minority in Myanmar. My father studied to be a doctor at Yangon University in Myanmar’s capital, but very few Rohingya become doctors. He couldn’t get a job after graduation and struggled to get training. After holding a demonstration with his friends, my father had to leave Myanmar and fled alone to Bangladesh. My mother was pregnant with her fourth child at the time.
My mother is the daughter of a large landowner in a village where Rohingya were able to live in peace. However, after the military government came to power, severe restrictions were placed on Rohingya in terms of movement, education and work. My mother defied her parents and followed my father to Bangladesh, with only the clothes on her back and his letters for comfort. She was reunited with my father, but life was tough.
My father hid his ethnic background and acted like a native from Bangladesh to protect his children. He did well as a clinic doctor and moved to a large hospital five years later.
In time, my father began negotiating with the government to help improve conditions for those living in refugee camps. People listened to him because of his standing as a doctor. But when the government changed, he lost his post. He took any work he could get to support his family and was hardly ever at home.
My father dreamt of returning to Myanmar one day and so he sought suitable husbands for his daughters among fellow Rohingya refugees worldwide.｀

My husband is a maternal relative born in Myanmar. For his intellectual involvements in politics, his father, a historian and writer, became unsafe. The family, including my husband, who was just 18 years-old, faced a similar consequence. He gave up his life as a Yangon University student and fled to Japan. His near-death experience is the stuff that films and books are made of. Two and a half years later he was finally granted refugee status in Japan.
I first met my husband when he came to Bangladesh for a visit after receiving refugee status. I was 18, he was 28. I was studying hard to become a doctor, but I knew it would cause my family problems if the authorities found out we were Rohingya, so I reluctantly gave up.
When I was introduced to my husband, I insisted that he let me continue my studies before I agreed to marry him.
I came to Japan on December 31, 2006. It was so cold it felt like a refrigerator. In April 2007, we moved into an apartment provided by the Refugee Headquarters (RHQ) and I began studying Japanese. I finished the six-month program ahead of time and passed Level 2 on the Japanese Language Proficiency Test.
Despite my husband’s promise to let me study, I didn’t think that it would be possible on his salary. Still, he kept encouraging me to look for scholarships.
My RHQ teacher introduced me to a Japanese language school in Shinjuku so I could pass Level 1 and try to get into a university. I received a 70% discount on the fees and studied furiously for two years. Then I learned that Aoyama Gakuin University offered one scholarship per year as part of the Office of the United Nations High Commissioner for Refugees’ (UNHCR) refugee higher education program. I thought I had as much chance of getting it as winning the lottery, but miraculously I did!

I wanted to study about refugees at university so I joined the School of Cultural and Creative Studies. I learned about UNIQLO’s support program for refugees in my second year. As a housewife, I was already a big fan because I often shopped there.
I became pregnant at the end of my first year. My husband told me to continue studying hard while I was pregnant and that he would help look after the child once it was born. My son was born in the summer of my second year. My husband gave up his job and started selling second-hand cars and looking after our son so I could study. We were blessed with a second child at the end of my third year. With the help of my teachers and friends, I was able to raise two children and graduate after writing my dissertation on refugees in Japan.
I did a 10-day internship at the UNIQLO Ikebukuro East Exit Store when I was a student. I have such a loud voice that I fast became known for my energetic and enthusiastic greetings. Some of my colleagues said they could hear me on the third floor!
The store manager and everyone were great, so I asked to work part time after the internship finished. The store manager didn’t mind when I asked to wear a hijab because I was a follower of Islam. I was so grateful and decided then and there that I wanted to become a full-time UNIQLO employee one day and help other refugees.

Helping people regain independence, one at a time

I stopped working part time at the Ikebukuro East Exit Store when I had children, but the store manager encouraged me to come back when my children were older. My husband’s halal food business struggled in the wake of the March 2011 earthquake and tsunami so we moved to Tatebayashi in Gunma prefecture. I had graduated from university by then and had some Rohingya friends in Gunma. The store manager suggested I work at the Tatebayashi store, so I put the children in nursery and got started.
Most people imagine refugees as poor people living in unsanitary conditions, but some of them might have actually come from more affluent backgrounds. To save themselves, they had to give up everything and flee to another country. You just can’t explain how that experience feels.
Rather than just accepting more refugees alone, I would like to see countries help foster their independence so refugees don’t lose hope. People can move forward if they have education and employment opportunities, and that benefits the country as well.
My dream over the next five years is to work as a UNIQLO representative to help Rohingya in refugee camps in Bangladesh. When my children are a little older, I want to become a full-time UNIQLO employee. If that isn’t possible, then I would like to do something myself to help refugees.
If we help one person regain their independence, then they can help the next person to do the same. To me and my husband, no amount of help is too small.